Where to Eat and Stay In Nice

Where to Eat and Stay In Nice

France has never been short of fantastic places to eat, whether it’s a Michelin-féted gourmet extravaganza or a simple neighborhood bistro. Nowhere is this truer than in Nice, where you’re spoiled for choice.

There’s a warm welcome in the hotels too, from up-to-the-minute boutiques to classic rooms that will leave you feeling pampered. Our line-up of the best restaurants and the finest places to stay in Nice will give you a smooth trip that’s packed with style. 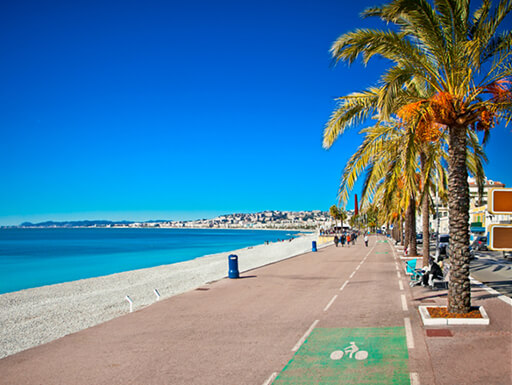 With its proximity to the Promenade des Anglais and over 100 years of catering to visitors under its wings, the Hotel Windsor could be forgiven for being set in its ways. Yet this is a hotel that has never rested on its laurels, and behind the 19th century exterior lies a fashion-forward respite incorporating fantastic design elements.

Art lovers will be in heaven at a hotel where the owners have asked celebrated artists to give each room a unique personality with their own take on interior décor. The rooms differ wildly, from cozy to stark, minimalist to maximalist. Even the elevator has had a makeover. And with a lush garden, fantastic pool and hammam, this is a hotel that fine tunes every last element to make sure it delivers a truly unique experience.

There’s a reasonable restaurant on site too, offering standard, vegan and gluten-free menus. Alternatively, you can leave the hotel and stroll to Le Bistro Dalpozzo for Gallic classics such as fish soup, oysters, snails, leg of rabbit and a perfect Paris Brest for dessert.

Nice has a number of signature dishes that you can’t leave the city without trying. They’re so ubiquitous that you’ll find them just about everywhere.

Socca is a pancake of chickpea flour that is as delicious as it is simple. Grab a portion on the street to see what all the fuss is about. You’re also in the birthplace of the Salade Nicoise, that timeless combination of anchovies, olives, tomatoes and eggs. Again, it’s hard to escape its presence in Nice, but it can be fun to hunt down some modern variants, with chefs putting a twist on the tried and tested.

Find the very best of these Riviera classics at Bistrot d’Antoine on Rue de la Prefecture. Unpretentious it might be, but it elevates the salad and other hearty Nice dishes like duck breast, kidneys and rabbit paté with ease.

Having feasted on French cuisine, you can sleep it off at the nearby Hotel Aston La Scala, a 4-star stay that offers stunning views from its rooftop pool and is handy for the beach, Promenade and the old town.

While much of France works overtime to preserve its long-held food traditions of local produce and ‘terroir’, meaning ‘the land’, it’s also becoming increasingly accommodating to people with celiac disease or gluten intolerance. While there’s no local organization certifying the restaurants, many have alternative menus, or will be happy to prepare a separate dish for you if you ask for it ‘sans gluten s’il vous plait’.

Make time to stop off and dine at Keisuke Matsushima – which puts something of a unique twist on some classic French dishes. The chef and décor are Japanese, but the kitchen turns out modern variations on Choux Farcis and Coquille St. Jacques, among many others.

At the other end of the scale, you’ll have the chance to visit laid-back cafés and bistros that cater to not just celiacs, but other food intolerances. Caju in the old town has a vegan focus and gluten-free options, while Pop-o-Thym in Cours Saleya specializes in galettes. For peace of mind and a healthy meal, drop by Koko Green vegan and raw café on Rue de la Loge – everything here is organic, home-made and gluten-free and the vivid green lime pie is a winner. 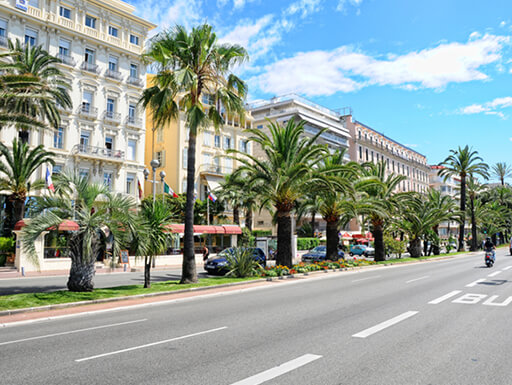 Few luxury hotels in Nice come with a view as romantic and all-encompassing as the Hotel Negresco. This is a hotel in the grand old tradition, open since the early 20th century and with a modern art collection rubbing shoulders with Louis XIII-period interior flourishes. The hotel boasts a private beach, open only to guests, as well as two stunning restaurants.

The casual but elegant option is La Rotonde Brasserie – try the veal chop with sage cream and fillet of beef with bordelaise sauce and potatoes gratin. On another level, however, is Le Chantecler, possibly the best restaurant in Nice and duly rewarded with two Michelin Stars.

This is high-end dining carried off with aplomb – as it should be when main courses hover around the 75-euro mark. You’re best to just bite the bullet and order the Grand Menu Signature, all 230-euros worth. You’ll be dazzled by crab and mango cannelloni with marmalade and caviar, followed by veal sweetbread with chorizo and chanterelles. As you’re staying here, you’ll also be free to explore the phenomenal wine cellar, all 15,000 bottles-worth. 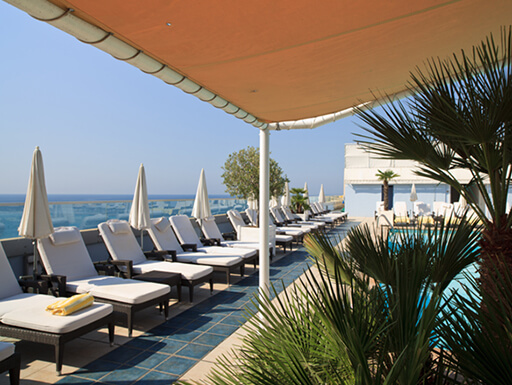 Room with a view

While there’s no doubting the prime location occupied by Le Meridien Nice on the popular Promenade des Anglais, it perhaps doesn’t have the most sympathetically-designed exterior.

What is does have going for it, however, is a sought-after address and stellar views (and comfortable rooms, of course). It also has La Terrasse, a restaurant which offers a wonderful panorama of the sea and the curve of the Bay of Angels. The food is tasty – pan fried scallops, duck pie, steamed sea bass and a hearty burger – but it’s the view from your table that will really have you coming back for more.

Got a great tip for a top-notch Nice restaurant or hotel? Let us know all about it on Facebook.

Hertz encourages you to be responsible. Don’t Drink and Drive. To read about all of Hertz’s Safety Tips, click here. To check out Hertz Rental Terms, click here.