Car enthusiasts are well aware of the history that was made in the year 1966: the introduction of the special-edition Shelby Mustang GT350-H. As soon as this remarkable Mustang was born, it had car fans immediately smitten with its gorgeous design and ultra-high performance. The car was only available for rental through Hertz, and the “H” in the name stood for – you guessed it – Hertz.

According to Joe Conway, Co-CEO of Carroll Shelby International and CEO of Shelby American, “The 1966 Ford Shelby GT350-H became a legend from the moment it was introduced.” It wasn’t just the design that created such a buzz — it was also the incredible opportunity given to regular working-class people to be able to rent these dream sports cars through Hertz. 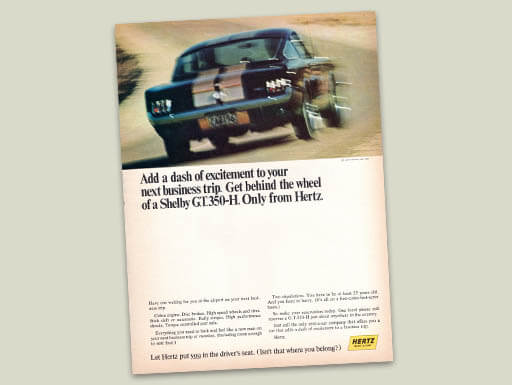 Over 50 years ago, in September of 1965, the General Manager of Shelby American, Peyton Cramer, and the Hertz Corporation came to a brilliant business agreement: They would offer the 1966 GT350-H as a rental car through the now-famous Hertz “Rent-a-Racer” Program. This deal created 1,000 Shelby Mustang GT350-Hs for use in the Hertz rental fleet, allowing customers to do more than just rent a standard rental vehicle for their needs.

A brochure from 1966 introduced the cars to eager renters, “These cars are available to business travelers who want a change of pace in motoring, by sports car owners away from home and by vacations who consider driving an enjoyable sport.”

The “Rent-a-Racer” Program inspired more customers to rent with Hertz (who wouldn’t jump at the opportunity to rent their dream car for the weekend?), while also creating more potential buyers for Shelby Mustang – talk about a genius business idea.

Members of the Hertz Sports Car Club in 1966 who were 25 years of age or older would simply pay $17 per day and 17 cents per mile (a pretty great deal for the time) and get to drive away from the Hertz lot in a performance 306 horsepower Mustang fastback. For most drivers, this was a chance to sit in the driver’s seat of a luxurious and powerful vehicle for a great deal—when purchasing that model may have been out of their price range. 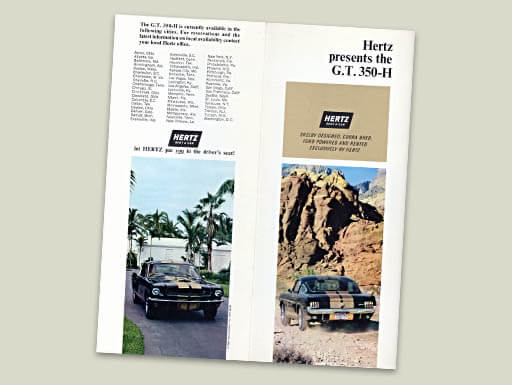 The Hertz “Rent-a-Racer” Program was a huge success for its time, but eventually came to an end after the pattern of vehicle repair expenses became too high. (Tales of the time say that some renters would take the GT350-H to the race track for a weekend of amateur racing, leaving much to be fixed upon return of the rental.) However, to those who were fortunate enough to experience the magic of renting a racer, the memories live on.

Classic car collectors have seen the 1966 Shelby GT350-H Mustang become a highly sought-after vehicle. The ones that are still left in commission are now extremely valuable, earning a net of one hundred and fifty thousand dollars or more in auctions. Those who are lucky enough to still own a Shelby GT350-H hold the keys to a piece of integral Mustang and Hertz history.

In 2006, forty years after its initial creation in 1966, Shelby and Hertz reunited once again to introduce the 2006 Shelby GT-H Mustang, available to rent in what was then called the Hertz “Fun Collection.” The 2006 Shelby GT-H Mustang, a new take on an old 60s model held a very classic, muscular build with some true performance favorite credentials.

Ten years later, in 2016, Hertz and Shelby once again teamed up to bring back the car for the fiftieth anniversary of the partnership. Ford produced 140 Mustang GT-Hs for that were available in ther Hertz “Adrenaline Collection” at 17 airport locations across the U.S.

Are you interested in more Hertz history? How about how a 22-year-old was able to start the company that later became the Hertz Corporation with a fleet of just 12 Model-Ts in 1918? You can read that story here.