Concept cars have long served as a way for automakers to showcase their vision for the future. These dreamed up cars are often packed with breathtaking features that, while radical and exciting, aren't necessarily practical. Many concept cars never materialize into anything more than a scale model — or perhaps just a drawing — but some become one-of-a-kind driving models that enthusiasts admire and envy both for their rarity and innovative design.

Among the most notable concept cars in automotive history are a trio of aerodynamic Alfa Romeo cars called Berlina Aerodinamica Technica (BAT), manufactured in Italy in 1953. (While the Alfa Romeo concept models are referred to as BAT mobile, they’re not to be confused with the Batmobile from Batman, an iconic car in its own right.)

"They are extremely important to the entire automotive industry because they bore so many futuristic design protocols that were eventually seen in production models," says automotive historian Mark Lambert. "They were ultra aerodynamic and they look so modern; even today, people are stunned to learn that they were made in the 1950s."

Only three of these concept cars were ever created, and all three are now on display at Blackhawk Museum in Danville, California. 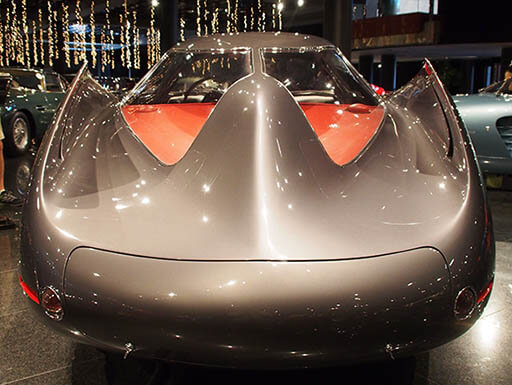 From the Airways to Highways

With large bumpers and curved fins, the sleek, graceful cars were designed to reduce drag and offer improved stability at higher speeds. To do that, Lambert says, designers tapped into the knowledge gained from World War II aeronautics, taking inspiration from an airplane fuselage, which gains stability as it goes faster.

"At that point, stability at high speeds was a huge deficit. Alfa designers were the first to attempt to solve this problem, and they realized they could use the principles of an airframe construction. They ended up with a car that was quite stable at high speeds."

Ahead of the Curve

The first car, the BAT 5, made its world debut at the 1953 Turin Auto Show. The tapered, metallic charcoal body was unlike anything the world had seen, and when the BAT 7 came on the scene a year later, designers had raised their game to produce a pale blue metallic car with a memorable dorsal fin and curved, inward-leaning tail fins.

"One of the problems facing high-speed cars was that designers never knew what to do with the headlights. They created a lot of problems, aerodynamically," Lambert says. "The Alfa designers were able to work around that."

With the BAT 7, the headlamps were hidden, and when Alfa Romeo displayed the BAT 9 in 1955, the lights were tucked into the curved, molded plastic fenders — something that changed the future of cars. 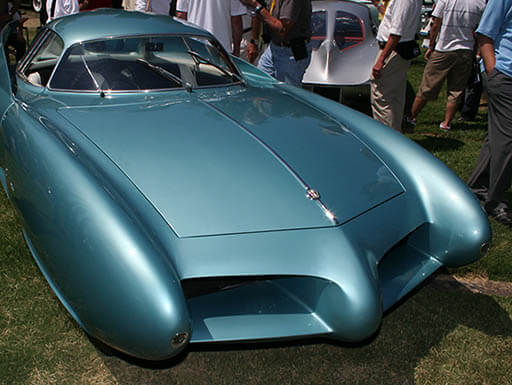 Despite the ultramodern appearance, the cars were built on an old Alfa Romeo 1900 chassis, which was a platform the automaker had readily available. A 90 horsepower, four-cylinder engine was all the power it offered.

"It was a humble, low-power engine on a dated platform, but you put this jet age body on it, and everything about it changed. They knew [the engine] could go 85 [mph], but when you put this sleek, slippery body on it, it would go 118."

Although some manufacturers' concepts are made for display only, Alfa Romeo made its BAT cars drivable, something that, in retrospect, helped ensure that they survived. 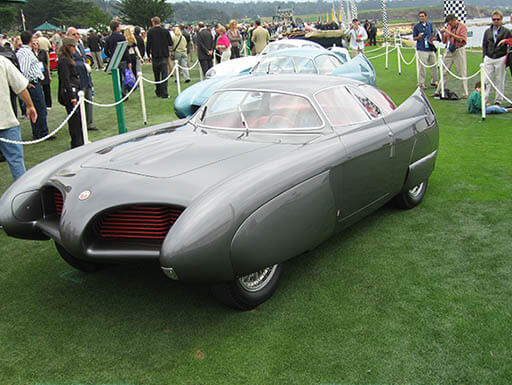 Although the BATs turned heads wherever they went, they were never destined to become production models. The designs required each car to be handmade, and in a post-WWII world, high dollar cars weren't in high demand, regardless of how stunning they looked on the road.

Yet, unlike the majority of concept cars, this trio survived. By 1960, all of the cars had been sold off — each to a different buyer — and, miraculously, Lambert says, they all managed to survive in good condition.

"It's truly a once-in-a-lifetime phenomenon to have all three of these cars survive and be together," Lambert says. Concept cars are often destroyed for liability reasons, and he says that the tough economic times in Italy during that era presented plenty of opportunity for the cars to be sold for parts.

Instead, each owner cared for each BAT until an American buyer named Don Williams — who had been fascinated with them since he was a teenager — set out to find all three. Williams, a storied car collector and owner of the Blackhawk Museum in Danville, California, spent decades searching them out and finally brought the cars together.

Today, they sit side-by-side in the museum, except for an occasional foray to the Pebble Beach Concours d'Elegance or, most recently, as the centerpiece of an exhibit on Italian automobiles at the Frist Center for the Visual Arts in Nashville.

Ellen Jones Pryor, communications director for Frist, says, “in so many ways, they encapsulate the post-war Italian automobile industry: emerging science and technology and the inventive expression of form and function."

Lambert adds that the fact that all of them have survived in such impeccable condition is nothing short of a miracle.

"The fact that none of them have been raced and wrecked or burned or damaged is remarkable. These cars are unlike anything else you'll see; they're irreplaceable," Lambert says. "There are thousands of concept cars that nobody knows what happened to, and chances are they didn't survive. It makes you realize what a privilege it is just to be able to see these cars."

What's your favorite concept car of the past or present? Tell us about it on Twitter.